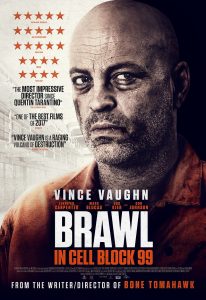 Brawl in Cell Block 99 was one of the best films of 2017, but I fear that it went under the radar for many. If you haven’t checked it out, then you must. The film comes from Bone Tomahawk director S. Craig Zahler and stars Vince Vaughn as a boxer-turned-drug runner who ends up in a vicious prison fight.

The footage shows the film’s love of long-takes, which makes the violence all the nastier. The film’s colour palette is grimy and icky, just like the grisly events that dominate the screen. It’s brutal and intense, and equally as brilliant as Bone Tomahawk; one of 2015’s best horror films.