Vestron Bringing Return of the Living Dead 3 to Blu-Ray

Grunge-era undead are returning to screens, and in glorious high definition, with The Vestron Video Collector’s Series set to release 1993’s Return of the Living Dead 3 on blu-ray. 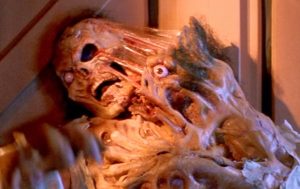 Updating the Mohawk-sporting punks of 1985’s The Return of the Living Dead with moody alt-rockers and a floppy haired hero named Curt, ROTLD 3 follows Part II, with the government now using the chemical Trioxin to reanimate the dead for military purposes. After a motorcycle accident kills his girlfriend Julie, grief-stricken youth Curt sneaks into a government Trioxin lab to bring her back. Struggling to cope with her new self, Julie indulges in a little self-harm and extreme piercing to suppress her newfound hunger, as she and Curt try to evade the military agents who pursue them. 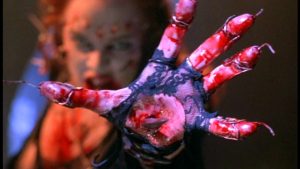 Directed by Brian Yuzna (Society, Bride of Re-Animator), ROTLD 3 is one hell of a cool sequel and the news of a blu-ray release is very welcome indeed. Vestron’s release comes packed with all-new special features including 2 commentaries and interviews with the film’s two leads. See below for the full list of extras included on the limited edition disc, which will hit shelves on November 22nd. 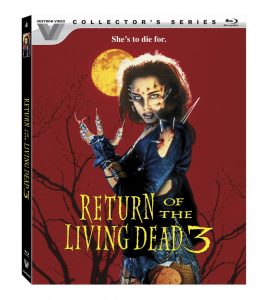