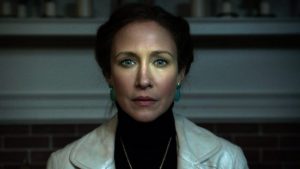 Michael Dougherty’s Godzilla: King of Monsters continues to build an impressive cast, and the latest addition is one many horror fans will appreciate. As reported by THR, The Conjuring and Bates Motel star Vera Farmiga has signed on to the monster sequel to Gareth Edwards’ 2014 reboot.

The site reports that Farmiga will be playing the mother of the as-yet unnamed character played by Stranger Things’ Millie Bobby Brown, opposite the previously announced Kyle Chandler, Brown’s onscreen Dad. Strong rumours suggest that Ken Watanabe will reprise his role as Dr. Ishiro Serizawa, making him the only member of the 2014 film’s lead cast to return.

Dougherty – who directed holiday horror favourites Trick ‘r Treat and Krampus – also co-wrote the film alongside Krampus collaborator Zach Shields and Max Borenstein. Borenstein scripted 2014’s Godzilla and co-wrote the upcoming Kong: Skull Island. It’s a safe bet then, that he will be involved in 2020 face-off Godzilla vs. Kong. Chandler of course has previous with The 8th Wonder of the World, having starred in Peter Jackson’s 2005 King Kong.

Godzilla: King of Monsters will be stomping into cinemas on March 22nd, 2019.