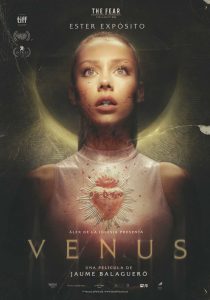 Directed by Jaume Balagueró, co-director of REC, Venus follows Lucia, a dancer who hides with her sister after being injured in an attempt to steal from her boss. But Lucia is unaware that something is very wrong with the rundown building’s residents…

Ester Expósito, Ángela Cremonte, Magüi Mira, Fernando Valdivieso, and Federico Aguado star in Venus, which was inspired by the H.P. Lovecraft short story “The Dreams in the Witch House.” The film releases in theatres in Spain on December 2nd before arriving on Amazon Prime Video.