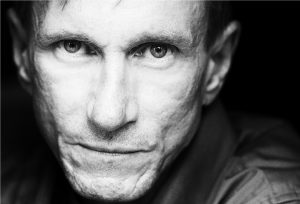 Like a character in his own fiction, Ray Bradbury just won’t stay dead. The celebrated fantasy / sci-fi author passed away in 2012 (August 22 would have been his 97th birthday) but his books are best-sellers at Amazon, his novel Fahrenheit 451 is in production at HBO Films starring Michael B. Jordan (Creed, Friday Night Lights) and his name gets 100,000 Google searches each month. Now one of indie horror’s own, Bill Oberst Jr. (Criminal Minds, Scream Queens) is taking Bradbury Off-Broadway.

Oberst’s solo performance, Ray Bradbury’s Pillar Of Fire, a tale of the walking dead that is one of Bradbury’s darkest early works, comes to New York City’s Theater Row on Sunday, Sept. 17 at 6:00pm as a part of the United Solo Theatre Festival after two sold-out runs in Los Angeles, directed by Ezra Buzzington.

Ray Bradbury later called the 1948 novella “a rehearsal for Fahrenheit 451.” Oberst calls it a hymn to Halloween. “From the opening sentence: ‘He came out of the Earth hating,’ Bradbury is defending Halloween and horror against those who want a world without superstition” said the actor. “In 2349, burial is banned – they burn people’s bodies like trash. There’s only one dead man left, and he’s pissed! Only Ray Bradbury can make you cheer for a zombie terrorist.”

Oberst, who shares a love of silent film’s Lon Chaney with Bradbury (Ron Chaney presented Oberst with the first Lon Chaney Award in 2014) is also writing an authorized solo stage portrayal of Bradbury himself, under the oversight of the author’s estate. The FX makeup transformation for that 2018 project is being designed by Jeff Farley, whose work on Babylon 5 won him an Emmy nomination.

Details on the NYC performance of Ray Bradbury’s Pillar Of Fire are at unitedsolo.org/us/raybradburys-2017. Check out the show trailer below.