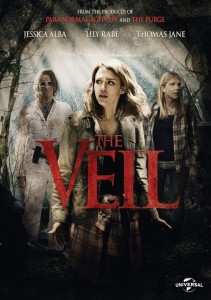 Synopsis:
Twenty-five years after the members of a religious cult commit mass suicide, the only known survivor returns to the site of the tragedy with a documentary film crew, hoping to understand some of the mysteries surrounding what happened. But some of the cult members may still be there, waiting for her return…

The slew of horror films which go straight to DVD or online distribution never inspire much confidence. True, there are some hidden gems which never see a theatrical release, but so many are by the numbers bore-fests that one learns to turn to them only when there is nothing better to watch. And never is it more obvious that a studio had no faith in their film than when it suffers this fate despite having recognisable faces in lead roles. 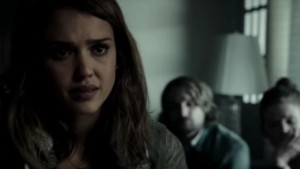 The Veil stars Jessica Alba (The Eye) as Maggie, a documentary filmmaker who wants to investigate what really happened twenty-five years ago when forty-eight members of the Heaven’s Veil religious cult committed suicide together at their compound in the woods. She enlists the help of Sarah Hope (played by American Horror Story’s Lily Rabe), who was five-years old when the tragedy happened, and was found sitting calmly amongst the bodies. Sarah has no idea who her parents were, or if they were even amongst the dead. Maggie reveals that her own father, the lead investigator in the FBI’s case against the cult, committed suicide himself shortly after discovering the mass suicide of the cult members. With both their lives having been ruined by what happened, and evidence suggesting that unrecovered footage of the cult’s activities might still be hidden within the compound, Sarah and Maggie head into the woods along with Maggie’s crew to find the truth. Naturally, they find more than they bargained for. 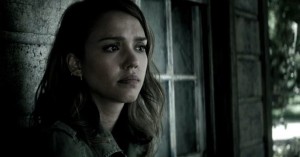 The Veil was originally penned as a found-footage horror film but underwent extensive rewrites to fit a more traditional style when the filmmakers felt found-footage had run its course. And those rewrites show. Everything about the setup screams found-footage – documentary film crew with all the right equipment, reels and reels of previously undiscovered footage just waiting to be found, a video camera clutched in the hands of a corpse. You almost have to respect the film for not taking the easy route. But the more traditional style of filmmaking  adds nothing except a dreary grey-green colour filter draining any life out of the otherwise interesting and atmospheric setting, and jarring transitions whenever the characters sit down to watch some of the old footage of the cult. Rather than showing the viewer the same footage the characters are supposedly viewing, we instead see the scene filmed and edited theatrically, and it’s here that I think the film really lost something by abandoning the found-footage setup. Take a movie like Ti West’s chilling The Sacrament, which featured the similar premise of journalists documenting the increasingly unsettling activities of a cult. West used the found-footage setup to create a sense of impending dread and tragedy, something The Veil is sorely lacking in.

As it is, the film plods along with very little in the way of actual scares, barring a few predictable loud-noises thrown in to make you jump. The film strays into supernatural territory as it is revealed that the cult were dabbling in forces beyond this life, but the whispering spectral voices and distorted footage of ghosts are nothing that hasn’t been seen before. When characters start splitting up and getting killed off one by one like clockwork, you know the writer has given up, and you probably should as well.

There is a saving grace however, and it comes in the form of charismatic cult leader Jim Jacobs, played by an almost unrecognisable Thomas Jane (The Mist). Clad in white linen and tinted shades, Jane is clearly having a blast chewing his way through every delicious scene he can get his teeth into. The film wakes up a little as soon as our heroes discover the old footage of Jacobs’ experiments in death, but the lacklustre climax will put you right back to sleep again.

If you’re looking for a creepy cult to join, you could do worse than checking out The Veil. But you could certainly do better as well.