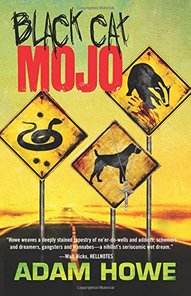 Black Cat Mojo, how best to describe this collection of 4 short stories, well I had more fun than a tornado in a trailer park, its just graceful as a pig on ice, lower then a mole’s belly button on digging day and hotter than two hamsters farting in a wool sock.

If your mind regularly trips or even gets pushed down to gutter level and don’t we all occasionally, then you’ll be in heaven with these tales off debauchery and immoral wickedness.

I could go quote mad here.

‘Momma made a gurgling noise, deep in her throat. She started teasing up the tarp, flashing Rummy some leg. Literally: one leg. She’d lost the other leg above the knee, probably to diabetes. All that remained was a gnarly stump, baby’s ass-pink at the sawed-off end. The leftover limb—and the other leg, for that matter—was rashed with bedsores and bristling with coarse black hair. She was naked below the waist. Her leg and stump led to a bush like a verminous haystack. The old hag’s labia grinned at Rummy through a rat’s nest of wiry hair, the withered brown lips glistening like something gone spoiled in a fishmonger’s window. Yolky yellow mucus oozed down her inner thighs, pooling on the bed.’

“Just to warn you,”Troy said. “Momma’s a squirter, so hold on tight.”

Seriously I’m so tickled I can’t get my leg down.

There’s more of course, comparisons to a fisherman’s bait box, you get the idea it’s all deep down dirty humour and refreshing in a way it really shouldn’t be.

The second story is ‘Jesus In a dog’s Ass’, Hank and Marsha live in a trailer, Hanks just bought a video camera with the intention of filming their sexual shenanigans and selling it. Big bucks, he thinks, while Marsha is completely unaware of his plan. So he sets about getting some practice in by filming the dog taking a dump.

‘Hank started filming the dog doing his business . Hank was sure other folks would find it just as funny as he did. He figured he’d film a few weeks worth of shitting, then edit the footage together with a music track playing— Duelin’ Banjos, say— put it up on YouTube with a catchy title— SCOOTER TAKING A SHIT’.

Then something amazing happens, watching the footage they see Jesus in the you know where. This starts an avalanche that can’t be stopped, there’s queues at the door and people are paying 5 bucks to spend time looking at Scooters ass.

Now this story goes in tandem with two of the finest crooks you’ll ever come across, if stupid could fly then these guys would be the fastest jets on the planet. I mean these guys rob the piss wagon so a sample doesn’t make it back to the lab to be tested, there’s more to it but this really is fucking priceless. And then another genius plan.

Now the other two stories were ok but I was just blown away with the first two as you can probably tell. Well worth giving this a try it’s near to the knuckle and very well written.