Forever Knight, the somewhat cheesy but endlessly endearing mid-90s vampire series, first got a DVD release in the early 2000s, but it was spread out over three different sets that aren’t always the easiest to locate almost 20 years on. Fans of the show are in luck though, because the Complete Series will finally be available this summer. 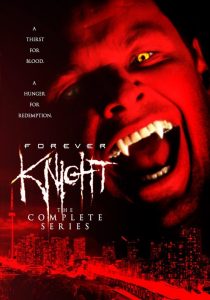 Released by Mill Creek Entertainment, the set will include all 70 episodes of the show’s three seasons spread across 12 discs. It will hit stores on July 9th.

Forever Knight stars Welsh actor Geraint Wyn Davies as Nick Knight, an ancient vampire trying to atone for his former sins by working for the police in modern-day (well, modern 90s) Toronto. The city’s medical examiner Natalie Lambert (Catharine Disher) tries to help him on his quest to become human again, but things are complicated by the return of Lucien LaCroix (Nigel Bennett), the vampire who turned Nick—and who isn’t ready to let him go.