She freaked us right out in V/H/S as well as last year’s SiREN, and now rising horror star Hannah Fierman toplines the cast of amusingly-named, retro-styled horror anthology Dead by Midnight (11pm Central), which premieres this weekend at the Atlanta Film Festival. 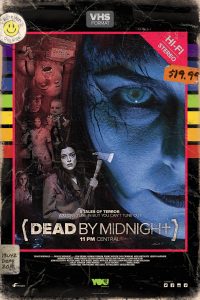 Synopsis:
“It’s Halloween at WKIZ when the malicious Mistress of Midnight (Erin Brown) arrives to host her annual horror movie marathon ‘Dead By Midnight’. When the WKIZ staff begins disappearing only to turn up in the increasingly darker films, it’s up to line producer Candice Spelling (Hannah Fierman) to stop the Mistress before her final and most diabolical film goes to air.”

The Atlanta premiere was heralded with this ace, VHS-styled poster, which we like very much. Fierman and Brown will be in attendance at the premiere, which takes place this Saturday, April 14th.