US Nails Poster Reaches Out

Following the film’s (very) limited UK release, a striking new poster for Nails has emerged ahead of its US theatrical run. 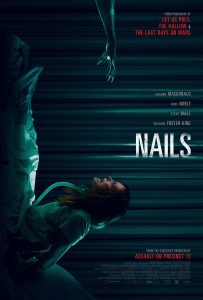 Macdonald plays “…happily-married track coach and mother Dana Milgrom, who’s survived a near-death car accident only to find herself paralysed and trapped inside her own body. Forced to communicate via an artificial voice program and hooked to a breathing machine, she becomes convinced that a terrifying presence called ‘Nails’ exists inside her hospital room. No one believes her – not even her own husband and doctors, who think she’s experiencing a mental breakdown.”