Updated Ghostface Mask In Action As Victims Are Hunted

The other day we posted an image from the latest Scream TV Series, which although not clearly, showed the latest Ghostface killer mask and how it differed from the original. We now have a gif and some stills that show the mask a little more clearly. 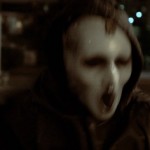 We’ve also been given a more in depth synopsis, so we now know a few names, some of the relationships we’ll be seeing and also the reason that video makes the whole town go killer crazy!

Synopsis:
In the small town of Lakewood, a Youtube video starring privileged and beautiful Nina as she’s brutally murdered in a crime of passion goes viral, exposing the town’s way of dealing with social hierarchy. The creative yet alone Audrey has her secrets spilled online through cyber bullying and has to try to hold her head up high whilst feeling ashamed. She does this with the help of her nerdy and clever best friend Noah along with her previous best friend Emma from elementary school. Emma’s mom Maggie, a medical examiner, works closely with the town’s sheriff to find the truth behind the slaughter spree in town, and find out whether it’s related to the town’s dark history of murder by a previously bullied teenager.