UNWRAP THE TRAILER FOR BLACK CHRISTMAS 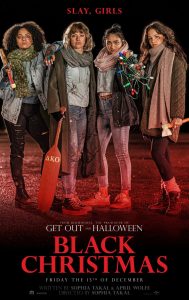 Feel the cheer, the Black Christmas trailer is here!

This new take on Bob Clark’s classic holiday slasher centres around a sorority at Hawthorne College where the girls are being picked off one by one—but not without a fight. Unlike the previous remake from 2006, this movie seems to diverge significantly from the 1974 original, seemingly focusing on a cult rather than a lone psychopath hiding in the attic. The film is directed by Sophia Takal (Into the Dark) and stars Imogen Poots (Green Room), Cary Elwes (Saw), Aleyse Shannon, Brittany O’Grady, Lily Donoghue, and Caleb Eberhardt.

Black Christmas will come down the chimney and into theatres on December 13th. Unwrap your gifts a little early by watching the trailer below.