Unsettling Trailer for The Childhood of a Leader

An unsettling and brilliant trailer has been unleashed for The Childhood of a Leader which seems to be following in the footsteps of recent horror hits Goodnight Mommy and The Witch. Much like those two films, this one conjures an atmosphere laced with dread and the underlying feeling that something very eerie is lurking below the surface. The tension and mystery is heightened by the spine-tingling score from Scott Walker and the literal darkness that dominates every frame, hinting at a malevolence that is sure to be unleashed by the time the film ends. 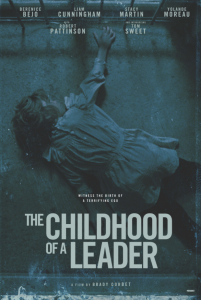 The film is inspired by the lives of 20th century dictators and centres on an American child living in France while his father negotiates the Treaty of Versailles. Played by Tom Sweet – perfect name for an actor playing someone so devilish – Prescott is a little brat and causes trouble wherever he goes. Check out the unnerving trailer below.

The Childhood of a Leader additionally stars Berenice Bejo, Robert Pattinson, Stacy Martin and Liam Cunningham. The film marks the directing debut of Brady Corbet, whose name you may recognise from 2007’s Funny Games, Melancholia and Force Majeure.

The Childhood of a Leader has, so far, received overall positive reviews and recently screened at the East End London Film Festival. It will be released in the USA on 22nd July 2016.