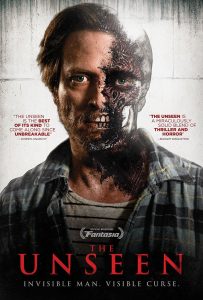 For quite some time I have often wondered to myself why there haven’t been any credible invisible man movies made in recent years. In fact, the only movies that I can remember without conducting research are, of course, Paul Verhoeven’s thriller Hollow Man and the original 1933 horror film The Invisible Man which were both based on the H. G. Wells’ novel. Nowadays the notion of The Invisible man is often relegated to television. So when I heard that Geoff Redknap, the make-up artist special makeup effects artist for Deadpool and The Cabin in the Woods, had directed his own invisible man film, my interest was more than peaked.

Moving away from the scientific aspect of the well known invisible man formula, Redknap’s tale tells the story of a man broken by tragedy. Bob, a forty-something factory worker long abandoned his family and his promising hockey career behind because of his own secret… he’s slowly turning invisible. After receiving a call from his distraught ex who informs him that their daughter is going off the rails he returns home only to find that his daughter is now missing. Desperate to save his own flesh and blood, Bob is willing to put everything on the line including his own secret.

The Unseen is an incredible film. It’s superbly directed by Redknap who expertly demonstrates a keen eye for detail keeping the film on track. However, the main success of the film is not from how great it looks on screen but in how it is executed. For example, this is no ordinary invisible man film but rather a very thrilling drama whose Sci-fi elements serve as a subplot only. Instead, the film is anchored by the solid performances from its cast. Aden Young is simply superb as Bob. His performance is rich of intensity and deep dark brooding and he nails every emotional scene with gusto. Likewise, Julia Sarah Stone’s performance as Bob’s daughter offers an interesting contrast to Young’s. Quiet, vulnerable and seemingly fragile, Stone’s performance makes her stand out and her character completely believable.

So how about those invisible man moments? Has Redknap’s impressive experience been brought onboard? The answer, in short, is a resounding yes as the special effects work in this movie boast high production values. At first, the subtle hints of Bob’s invisibility are simple yet effective but as his condition grows worse the audience catches glimpse of inside Bob’s body. Every organ, every vein, every half-visible sheet of muscle is seen and it gets even more shocking as time progresses. Clearly a lot of work was put into these moments and everything pays off as the attention to detail is incredible and certainly made me feel queasy on more than one occasion. 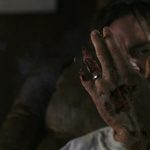 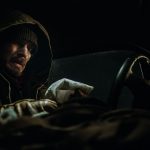 Unsurprisingly, I was left impressed with this film. Its effects were incredibly detailed and they made me squirm but for all the right reasons. However, my love of this film didn’t end there as its dramatic elements drew me in and the performances by Aden Young and Julia Sarah Stone kept me there until the very end. It is difficult for me to find anything wrong with this film as it was a real treat and for that reason, The Unseen has remained one of my favourite genre films that I’ve had the pleasure of seeing on the festival circuit this year.