Unofficial It Poster is Scariest Yet

While there’s nothing at all wrong with the official posters for Andrés Muschietti’s It, they’ve been somewhat eclipsed this past weekend by this beautiful beast from Half Hazard Press, an independent print and design studio based in America’s Midwest. 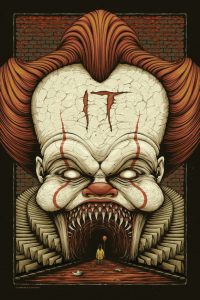 The poster will be included in Gallery 1988’s exhibition dedicated to the upcoming Stephen King adaptation, which opens on August 31st in LA.

The first in the two-film adaptation focuses on The Losers’ Club as children as they take on the ancient evil in clown guise, with the second film depicting the friends reuniting as adults to kill off the entity once and for all. Part 1 sees Stranger Things’ Wolfhard again sent back to the ‘80s, bringing forward the narrative from King’s novel, which began in the 1950s.