Universal’s The Mummy Brought To Life in First Teaser

With Universal’s revival of their Classic Monsters creeping ever closer, a full trailer for the first entry in their new universe – The Mummy – is expected to land Sunday. Ahead of then, they’ve released a very brief, but actually quite revealing, teaser, which you can watch below.

The Mummy will kick off Universal’s expanded universe, a model seemingly essential for all the major studios ever since Marvel opened those lucrative floodgates. It takes place in a modern-day setting, as per Jon Spaihts’ script. The Prometheus writer also wrote Doctor Strange for Marvel, and is already set to pen another Universal Monsters entry, Van Helsing. As well as directing The Mummy, Alex Kurtzman produced alongside Chris Morgan and Sean Daniel, who produced the Brendan Fraser-starring Mummy trilogy.

Tom Cruise headlines the cast, and is expected to appear in a number of the new Monsters films. Also starring is Russell Crowe, Annabelle Wallis, Jurassic World’s Jake Johnson and Courtney B. Vance. Star Trek Beyond’s Sofia Boutella plays the titular Monster, who we get a pretty decent glimpse of in the teaser. 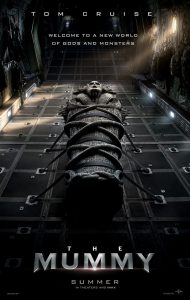 Thought safely entombed in a tomb deep beneath the unforgiving desert, an ancient princess (Boutella) whose destiny was unjustly taken from her is awakened in our current day, bringing with her malevolence grown over millennia and terrors that defy human comprehension.