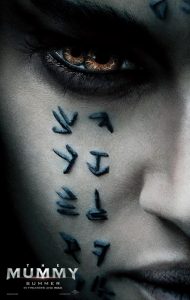 A new poster has landed for Universal’s upcoming horror epic The Mummy, which kicks off their expanded universe of their revived classic Monsters. Showing Sofia Boutella’s titular being in extreme close-up, it shows one of her weird-ass eyes that formed the trophy shot in December’s trailer.

Thought safely entombed in a tomb deep beneath the unforgiving desert, an ancient princess (Boutella) whose destiny was unjustly taken from her is awakened in our current day, bringing with her malevolence grown over millennia and terrors that defy human comprehension.

Considered pretty safe hands in Hollywood, director/producer Alex Kurtzman and producer Chris Morgan have between them been instrumental to successful franchises including Transformers, Star Trek, Mission: Impossible and the Fast & Furious series.

A new trailer for The Mummy is rumoured to be premiering during The Walking Dead season 7 finale on Sunday night (tonight).