UNIVERSAL REMAKING THE NIGHT OF THE HUNTER 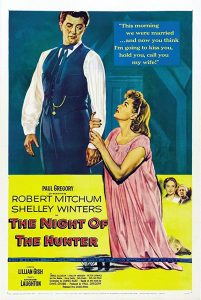 Universal Pictures is developing a remake of Charles Laughton’s 1955 noir horror classic The Night of the Hunter.

In the original film, which was based on David Grubb’s novel of the same name, a religious fanatic, con man, and murderer marries a gullible widow to find out where her late husband stashed the $10,000 he stole during a bank robbery. But when the widow’s young children are reluctant to tell him where the money is hidden, the man plots increasingly sinister ways to uncover it.

Matt Orton is penning the script for the remake. Amy Pascal and Peter Gethers will serve as producers.