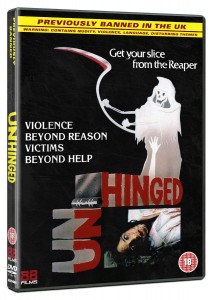 Synopsis.
Three young girls, Terry, Nancy and Gloria are heading off for fun and frolics at a music festival when they experience a car accident. Taken in by Marion Penrose and her elderly mother at an isolated mansion the girls are anxious to let family and friends know where they are. With no phone at their location, one of the girls injured and the Penrose family harbouring a shocking secret, this might not be the safe haven the girls are being led to believe. But will they realise the danger they are in before it’s too late?

UK cult horror label 88 Films kick off their Slasher Classic Collection with former video nasty Unhinged (1982) on DVD. The label present this slightly obscure, and once banned, underrated classic for fans with an updated director’s commentary included to accompany the main feature. The film is one that tends to float under the radar of many horror fans, and vastly deserves much more attention than it has had over the years. On this note it is nice to see it included amongst the collection- alongside more notorious and well-known titles such as Herb Freed’s Graduation Day.

During the early 80’s the horror genre was literally being saturated with slasher oeuvre. A relatively quick and easy way to bring in the cash on a limited budget filmmakers were drawn to the allure of the hack and slash in terms of economic return and simplicity- stick in a few boobies, plenty of grue, inexperienced (cheap) actors and young audiences would be queuing to get into theatres as long as what was on offer was bloody and sexy enough. Therefore it is understandable that a mammoth amount of slasher flicks came out of this period, 79-83 in particular, and for that reason this era earned itself the title of the Golden Age for the subgenre. It is true that most of the best examples were produced around this period, and while not all of the films made during these blossoming years became cult classics, a large percentage of them did and still reign supreme to this day as being head and shoulders above the rest. Unhinged wasn’t one of these innovators by a long shot, it wasn’t even one of the best examples of a slasher. Yet there is something endearing about the film that has ensured- that for this reviewer at least- and indeed many other fans, Unhinged is one of those cult titles you always find yourself insisting to the uninitiated they must watch.

Producer, writer and director Don Gronquist made the film on a teeny tiny budget of 100,000 dollars, limiting filming to a mansion in Portland, Oregon, and utilising a cast of unknown amateur actors. The cast is miniscule compared to some genre cousins, consisting of barely double figures, and that’s if you count in the couple of voice artists in the credits. On this note it doesn’t take a genius to add up the numbers and come to the conclusion there isn’t going to be a large headcount involved when it gets down to the nitty gritty. Sadly, despite this fact being glaringly obvious from the opening credits, there are still those who come away from Unhinged feeling let down that the film didn’t live up to its ‘video nasty’ moniker, and are only too happy to voice their negative opinions online in forums and review sites. Yet to go into the movie with an all guns blazing approach is to do the picture a great disservice, for the joy to be found in Unhinged comes from the subtle approach at building the narrative. The film may have been once banned, but this means nothing in terms of actual content. If you look at many of the films on the DPP 72 banned list there are many examples there that have had no problem being passed by the censors in recent years- without cuts- and many that seem tame by today’s standards; not every film is going to reach the pube ripping obscenity heights of the likes of The Beast in Heat (1977). Therefore Unhinged is a film best viewed for the first time with no expectations- you never know it might just surprise you.

What Unhinged does offer is a wonderfully bleak and nihilistic atmosphere. Dirty and gritty the movie owes a great debt to the exploitation films of the former decade. There might not be much in the way of action, but what does occur is worthwhile. The ending, especially, was fairly shocking and brutal for its day, and still manages to strike a chord in its delivery- tinged with a glorious nastiness you can almost taste, there is something quite delightfully feral about the film’s parting blow.

The low-budget eighties retro feel now works to compliment the piece; this is a film that looks and feels early eighties in its pure unadulterated form and can be enjoyed on the basis that if you are looking for a flavour for the time and place, there is plenty to find here. While the bargain basement production values and amateur acting all add to that dirty drive-in feel that separates Unhinged from its bigger budget peers. On this basis the film becomes somewhat of an indie underdog. Director Gronquist might not have had a lot to work with, but he demonstrates some skill for building tension and atmosphere. While the offbeat acting standard involved with the piece works in giving the proceedings an unsettling edge at times. Janet Penner as Marion Penrose and Virginia Settle as the old mother Mrs Penrose both provide oddball characterisations that make for memorable viewing- with more than a few curious moments between the two. The three girls Lauren Munson as Terry, Sara Ansley as Nancy, and Barbara Lusch as Gloria all provide some early eighties fashion and glamour, although not much on the nudity front which may disappoint some fans.

Over all this is one film that fans of the cult and curious are going to want to check out. Unhinged might not have the gory glitz of many of its peers, but it more than makes up for that in grit and determination. Perhaps not immediately gratifying, it is a film that deserves some patience but pays off with a wonderfully nihilistic ending. Out now uncut from 88 Films (DVD).