This is the second book from Monte Plaisance in the Nightstalker series. I was blown away by the first book, The House on Judith Street. So it was exciting to check out this follow up, The Unhallowed.

Our story begins with high school loner, Zach, contemplating jumping to his death. Something stops him, and later at a visiting carnival an encounter with a clairvoyant changes his life. Zach is given the power to seek revenge against bullies in return for serving the needs of a demon. We’re reunited with the heroes of the first book, the demon hunting NightStalkers. They are still trying to come to terms with what happened and their new vocation as demon hunters. There is some recap from the first book to catch new readers up. Although it would be a shame not to read The House on Judith Street. The demon they defeated and captured in the first book had friends and they want him freed.

There are creepy omens and warnings of the battle to come, like a possessed mule randomly killing during a tourist cart ride in New Orleans. I really enjoyed these genuinely creepy moments. There is a real sense of place throughout the book with the unique setting of south Louisiana, including bayous and the above ground cemeteries of New Orleans. 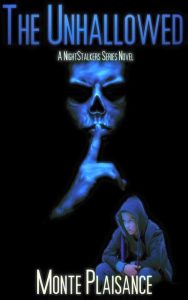 Aside from the demon and demon hunters, another player in the story is the police. The police find themselves completely out of their depth when small town Louisiana suddenly has a variety of impossible thefts and a horrific occult suicide.

I really liked the character of the demon – manipulative and intelligent, with a distinct personality. We also get to know the members of the NightStalkers more, and this story builds on the characters already established.

The book has a solid and gripping finale as the demon’s cards are all laid out, revealing the game it is playing. It doesn’t quite reach the chilling heights of the first book, but it’s an enjoyable read and a great series. By the end, the wheels were already turning for the next book.