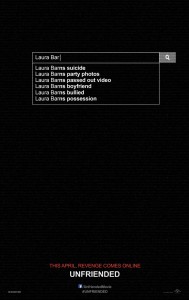 Five friends are tormented inside a chat room by a stranger claiming to be a recently diseased girl. Their friendships are tested and secrets exposed as the internet troll plays violent and deadly game.

If UNFRIENDED is a sign of things to come then I want off this planet. That is not to say that I disliked it. To the contrary actually. I was quite impressed with its use of social media to explore a timeless slasher formula and I was caught off guard at how effectively it managed to keep me engaged. The thing is that the entire duration of the film is told through a Skype chat. For 80-something minutes the audience is privy to a conversation amongst friends and while this particular example works quite well, I sure hope it’s not the first of many. This is NOT a trend that I am willing to indulge and I doubt I will be as generous to others moving forward.

The film begins with a Youtube video of a girl killing herself. We are then introduced to 5 friends in a conferenced Skype chat who were all close to her. An internet troll enters the conversation anonymously and hijacks the discussion and the friends are unable to remove them. Over the next hour secrets are revealed, loyalties are tested and blood is shed.

UNFRIENDED is a tried and true formula for the new generation of teenagers. To most people under the age of 18 the film will feel fresh and exciting but seasoned genre-fans will recall films like PROM KNIGHT, THE PROWLER and MY BLOODY VALENTINE. Of course experimenting with the convention was deliberate and its tropes are very much an intentional throwback. Director Levan Gabriadze exploits the multi-platformed congestion of a computer screen brilliantly as the mouse curser becomes the unlikely protagonist. Its every move and click determines the turn of events as our attention is pin-balled from one browser to another. As the characters are tormented the suspense is lifted with a clever use of glitch’d images and an eerie ongoing provocation from the stranger. Who would have thought that a messenger pop-up screen would prove to be an effective jump scare?

I am rarely enthusiastic about found footage films and most of them leave me underwhelmed. Occasionally one comes along with a new spin and my attention is captured momentarily. UNFRIENDED definitely works and it is very skilfully conceived. The script is well written and structures and the edit is impeccable. What is a seemingly simple premise is actually a very smart and concise execution. There is a lot going on at any given moment and I can only imagine how exhausting the edit must have been. The soundtrack is cheeky too, as Spotify is left open beneath all of the browser screens and different songs are selected throughout the film.

Whether or not UNFRIENDED is scary is a matter of opinion. It didn’t make any of my hairs stand on end, nor did it send cold shivers down my spine. In fact I was charmed by its structure but unaffected by the horror. Other patrons in the cinema did react accordingly, however, and the scare factor definitely resonated amongst them. With a heavy focus on cyber-bullying the film might also strike a chord with some of the more impressionable and vulnerable viewers. As with the slashers of old, there is a cautionary tale at the heart of the story and teens might just sit back and think…. “OMG, that’s… like… so true!”

It is no BLAIR WITCH PROJECT and it’s a far cry from REC but in terms of found-footage, this one stands out as one of the more innovative. Lets hope that it’s a flash-in-the-pan that doesn’t spawn sequels or copycats because one is quite enough.