Synopsis:
When strange things start to happen in his home, Shawn is encountered by a mysterious man called Gabriel who describes the grave danger he and his wife may be in. Shawn must set out to tackle an ancient evil and put an end to his family’s curse. 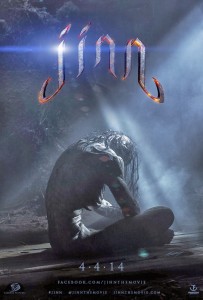 Underworld: Legend of Jinn begins intriguingly as it explores the history of the creation of humankind, angels and jinns that is set to pave the way for the events in modern day. The idea of a race or species trying to gain back lost control is nothing new, but the confidence exhumed in this dramatic beginning that talks of man being reminded of the Jinns’ existence is, I admit, gripping and instantly piqued my attention. Unfortunately, this interest began to fade fast when Jinn abandoned its fun and exciting beginning for an overly sentimental and predictable middle and end.

Jinn’s first 10 minutes are a wonderful embodiment of all that can be right with a film about an evil genie. The early scenes are awash with an air of mystery both physically and atmospherically as the locations are seeped with smoke and purple lighting that convey an eerie sense of mystery, but also, render the film quite visually appealing. The jinn itself is a freaky looking thing and, if you’ve seen the poster, the film is quite proud of its sinister being, and so it should be. The jinn floats through the smoke and shadows of its cave, makes its way to the man that threatens its existence and it’s unnerving. It’s cheesy, but it’s unnerving. This historical introduction to the jinn and its evil desires is an entertaining and promising start, but it’s a shame Jinn can’t maintain this level of enjoyment throughout the rest of its run-time.

Jinn starts to go downhill almost immediately after it hits the present day. From the overly cheery music to the sickening level of sentimentality and the clichéd portrayal of the young, perfect, married couple, Jinn topples off a cliff and never manages to get back up. It becomes increasingly frustrating to watch the further it goes on, with pointless twists and turns thrown in for a failed dramatic effect. The audience will not feel attached to this young couple, because they are painted with an aura of deceit. They don’t feel real and soon their situation becomes even more impossible to believe. The introduction to Gabriel (Ray Park) furthers the feeling of fakery, because quite honestly, his name is just ridiculous. A magical being called ‘Gabriel’ is Shawn’s guardian angel? How original.  The sickly sweet couple and other uninspiring characters – there’s also a priest, of course – doom Jinn to a hell filled with other forgettable features.

The lacklustre feelings toward Jinn do not end with the characters, because there’s plenty more to dislike in this dire tale. The overall air of predictability that hangs over Jinn refuses to pass and it becomes difficult to watch as everything unfolds as you would expect. The mystery and intrigue that was conjured at the beginning feels like a lifetime ago by the time Shawn is battling the demonic jinn. Gone is any hint of a surprise and in its place is a cowardly and dull layer of certainty. The film still manages to look very pretty and there’s an impressive – if not, quite awkward – moment of slow motion that sees Shawn whack out his best battle moves. It’s extremely silly, but by now, you’ll probably have realised that pretty much anything goes. Yes, we want to have Ray Park and his gruff British accent play a mystical being, yes we will have an entirely pointless car chase and, damn right, we will have some badass slow-motion, because we’ve made a god damn film about a god damn evil genie. 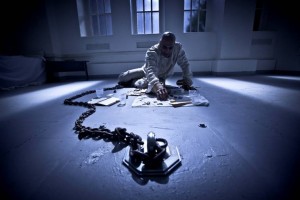 Jinn definitely has an interesting story deep within its core and it’s a shame that it refuses to flesh it out. Rather than succumb to cliches, Jinn should have been brave and presented us with something as intriguing as the mythology its story is based on. Aside from its pleasing visuals and special effects, there’s very little to enjoy within this un-scary and dreary 90 minutes. There’s plenty of room for jinns, djinns and genies in horror cinema, but this below average Jinn is not welcome.