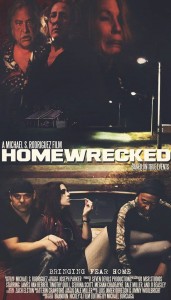 Filmmaker and actor Jim Van Bebber is a celebrated figure in cult horror circles. Since his action/gore/martial arts feature debut Deadbeat at Dawn (long unavailable in UK) in 1988, he has built a strong CV of mean, unflinching horror built up of cult shorts and 2003’s The Manson Family, his only feature directorial credit since Deadbeat. He has also directed music videos for Skinny Puppy and Pantera among others. His latest acting role is in upcoming horror short Homewrecked, directed by Michael S. Rodriguez, also currently working on his debut feature, Rhonda Rides to Hell.

Homewrecked tells of Nora Harper and her husband Rick (Van Bebber), who is suffering traumatic effects having recently returned from war. A meal with Nora’s father is interrupted by a knock at the door, and a young woman pleading for help, but this turns out to be a ruse for a violent robbery. Rick is bound and taunted, asked to choose between giving up the contents of the safe, or the lives of his loved ones. The pressure mounts, and Rick reawakens the soldier inside; a soldier who was a killing machine. 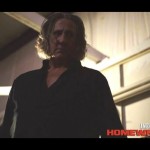 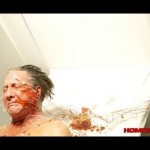 Homewrecked completes a trilogy of shorts directed by Rodriguez, following Night of The Sea Monkey: A Disturbing Tale and Lamb Feed. Van Bebber, who also stars (and serves as cinematographer) in upcoming cult gore revival American Guinea Pig: Bouquet of Guts and Gore, appears in Homewrecked alongside Sebrina Scott (Overtime, Piranha Sharks) and Tim Quill (Army of Darkness). The film is completed and will screen at festivals this year. Rodriguez has also written the long-awaited UK/Serbian production 6Days66Years, starring Demons legend Bobby Rhodes.