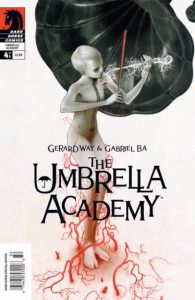 Ex-My Chemical Romance member Gerard Way’s graphic novel The Umbrella Academy has landed a live-action series on streaming giant Netflix. The pilot episode will be written by The Exorcist’s Jeremy Slater and will, of course, be inspired by the graphic novel series.

The Umbrella Academy follows a set of dysfunctional superheroes called The Monocle, Spaceboy, The Kraken, The Rumor, The Séance, Number Five, The Horror and The White Violin as they try to solve the case surrounding their father’s unexplained death.

When speaking about The Umbrella Academy, Cindy Holland – Vice President, Original Content for Netflix – said:
“What drew us to The Umbrella Academy is that it’s wholly unique, visual and stylised. These aren’t the usual superheroes, and this series will embrace the singular tone of the graphic novels — dark yet humorous, supernatural yet grounded in reality. We’re excited to 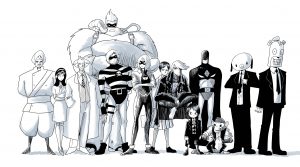 see this world and introduce these unforgettable heroes to Netflix members around the globe.”

The Umbrella Academy will consist of 10 episodes and should hit Netflix in 2018. Keep your eyes peeled for more!