This is a collection of four short stories. The stories in this book don’t follow a common theme. They are totally different styles and that to me makes it even more interesting. You get a true picture of depth of talent this man has. I have included my feelings of each story in this collection.

RADIO FREE NOWHERE
Conrad and Ashley are on a road trip. Ashley left the IPOD at home and the music on the radio is pathetic. Conrad doesn’t know but she did it on purpose. His music is pathetic as well.

When they stop for gas, Ashley is entranced by a song she hears playing inside the station. The attendant tries to give her some ear plugs so she can block out the music. She doesn’t understand why and refuses them.

She should have listened to him.

This is an excellent short. Very few characters but very effective in its execution. You know once the advice of the attendant is ignored that something bad is going to happen. You just don’t know what, when or how.

This story is Mr Keisling’s modern day take on the song of the siren. The end of this story if fantastic. It is so creepy the way it is written. If I had have been involved, I would have run very far, very fast.

They come across an overturned pickup truck with a woman lying injured in the middle of the road. Martin is a doctor and has to go help. As he tends to the woman, Karen sees other people sneaking out from behind the truck. Martin and Karen are drugged and kidnapped with no idea by whom or why.

As Karen comes round, her father’s voice helps her decide what to do. She must save Martin. As truths unfold, who will be saved and who will be sacrificed.

Loved this. Again very few characters involved in this story. This is something that Todd Keisling does very well. He doesn’t need to fill the story with unnecessary people and side-lines to make it interesting. The characters he does introduce you to are very strong and command the stage when they take it.

SAVING GRANNY FROM THE DEVIL
Todd is eight years old. He lives with his mom and his Granny. His Granny is his idol. He would do anything for her. There is no one like her in the world.

One day while playing, Todd is jumped by two local bullies who lock him in an abandoned kennel with a dead dog. The dog talks to him. It offers him help in dealing with the bullies. The dog changes into the form of a man, Harvey, and helps him chase off the bullies and escape.

As his Granny gets ill, Todd thinks to himself that he would give anything at all to save his Granny and stop her from dying. Harvey appears again to offer his help but only if Todd makes a deal with him. After shaking on the deal, it dawns on Todd that he may have just made a deal with the devil.

Again a totally different story. This one seen through the eyes of a man telling the story of his life from being a little boy through to adult hood. A sort of coming of age story. The only difference is a deal has been made with the devil and no one can be sure when he will arrive to collect.

As well as being a creepy tale, this is beautifully written. It examines the relationship between a young child and his best friend, his Granny and what he is prepared to do to save her life. It follows him through his life and the decisions he must make. Both good and bad. You can’t help but wonder how things would have gone if he hadn’t made that deal.

THE HARBINGER
Felix Proust works for Toys in the Attic magazine. He is on a trip to Dalton to interview the elusive Miss Maggie Eloquence, owner of a local company that makes dolls.

When he gets to Dalton, all does not seem right. It turns out Miss Eloquence doesn’t do interviews and won’t see him. In a diner he bumps into the resident drunk who secretly asks to meet him later to divulge the secrets of Dalton.

What he tells Felix can’t be true. It just doesn’t sound believable. Felix sets out to find out. Nothing could prepare him for his eventual meeting with Miss Eloquence.

I don’t know whether it’s because this one has dolls in it or not but this was one verrry creepy tale. It reminds me of some of the old Hammer Horror films I used to watch as a kid. I could imagine this being set in the 70’s. It has that sort of feel about it.

Felix is a man recovering from a pretty torrid life. He really just wants things easy now. He tries not to get involved in things but just can’t help himself. When he starts to look for answers he notices things just aren’t right. This is where you will start to get creeped out. There are no huge elaborate scenes to try and scare you. It’s the little, subtle things that do it. Something being in a different place than it was a few minutes ago. That sort of thing. 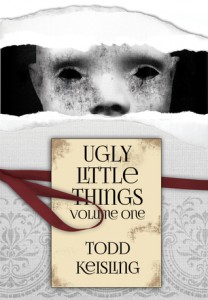 It has quite a big ending and again brings me back to the old horror films. Brilliant stuff.

To summarise: 4 short stories of horror. Not jumpy horror as I would call it but slow horror that seeps into your pores and gradually gets you crapping yourself. Every story is completely different from the last. It’s a very good mix. Todd Keisling has proved to me with this collection that he is a master of writing something which doesn’t need a whole host of characters and huge elaborate scenes to make something creepy. He can do it in a small amount of words. Well worth picking up if you’re after an “easy” read, as in no big complicated stories. A perfect read for a summer’s night just as it’s starting to get dark and cool down.