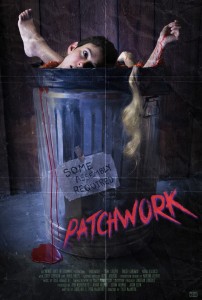 Canadian born Tyler Macintyre has amassed a wealth of experience in the filming industry through his editing skills, writing and directing. Therefore, it comes of no surprise that Macintyre has co-written and directed the most incredibly funny horror/comedy of 2015 / 2016.

Although his latest feature Patchwork is not released until the middle or end of this year, the attendees of FrightFest Glasgow were extremely lucky to get a screening – and Scream was lucky to speak to the man himself……

Scream: Welcome to FrightFest is this your first time?

Tyler: It is yeah. I edited a movie called Altergeist a couple of years ago that actually played in London last year. This is a movie that John Negropontes produced and he is a producer on Patchwork. This is my first FrightFest experience. It is going great, everyone is really gracious and it is a great crowd. But by the time I get over my jetlag it will be time for me to go home.

Scream: Has Patchwork been shown at any other festivals?

Tyler: Yeah it premiered at Scream Fest in Los Angeles where we won best film, Toronto After Dark where we had best actress and we played at Dead Fest, we have BIFF coming up and one in Brazil.

Scream: In Patchwork we have three women, which is kind of like the Holy Trinity. Why specifically did you want three?

Tyler: I thought it was a more of a practical reason but I kind of liked dividing it up like a head hands and heart kind of thing. I think people have certain denominations of characters, like the Ninja Turtles Ghostbuster type of team where it has to be four people, but I gravitated towards three. I like that Butch Cassidy and the Sundance Kid type of dynamic where you throw people into misdirection’s.

After Tori we had to try and cast people who were quite different and even though they are all three white girls from Los Angeles they are all very different in their comedic space. So I think it worked out reasonably well. I didn’t want them to be victims in the narrative, I wanted them to support each other, work together and find out what is missing.

Scream: And there is nothing better than bonding when you’re killing.

Tyler: That’s the funny thing. Sexually it is horrible from the monsters perspective and then we are really rooting for someone to murder a bunch of innocent people. Which when you think about it is a little bit messed up. It is fun really that you can put the audience in that kind of position. I try to avoid complete parodies but I love them.

Scream: How did the idea for Patchwork come about?

Tyler: Well I was hanging around with a friend of mine called Karen, we were having dinner and she said ‘Oh I love that girls necklace’. She was very much picking people apart about ‘I like her hair’ etc. and it was all kind of morbid. So when I was brainstorming later on I was thinking about a rehash of a Frankenstein story. I thought no one ever delved too far about the idea of collecting the body parts and what that means. It is usually about the idea of creating life, playing God and bigger religious questions. This is very much about trying to collect the perfect person. So I was trying to tie it back to Madeleine who has deep-seated insecurities. She is trying to make herself perfect, which literally means taking that persons hand, that persons eyes, there is something fun about putting a character together like that and then once we stumbled on the idea of the three girls talking in the head, it started to make sense and we haven’t see a story quite like it.

Scream: I found Patchwork to be so different and a total break from the norm.

Tyler: Yeah, I was really concerned. There is a really strange moment 12 minutes into the movie where you really have to establish ‘Oh there are three people in this body’.  You have to bite that bullet, move on and then you can have some fun. If you don’t get that premise… It is really tough trying to get that across in a trailer because people are like ‘woah what’s going on!’ but in the movie I think it works reasonably well as long as you accept it. But there is no explaining it away; there is no scientific thing.

Tyler: Ok yeah. There were two different puppets, one that was moving and one that was snarling with his head turning around. There is a company called The Odd-lot Puppetry Co.  in Canada that created it for us.  For a while we weren’t going to have it in it, but it is really funny because Owl Cat was like five minutes into the movie but we don’t pay it off until the last two minutes of the movie. It’s a big gag (laugh)

Scream: There is a lot of humour in your movie, is that something that comes from yourself? 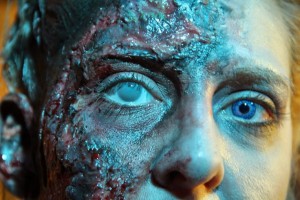 Tyler: Yeah! I’m hilarious! (he really is) Actually a lot of the humour is collaboration between myself and Chris Lee Hill, who is my writing partner. When he writes stuff by himself he tends to write pretty commercial stuff like ‘How I met your Mother’, which is really well observed and really sarcastic. When I write stuff it tends to be a little bit darker but when we get together, it gets a little bit more twisted and we are more fun together than we are apart. We are very conscious what we are saying and what we are paying off. Like I’m a big movie fan of Edgar Wright and Jo Cornish. Those guys have such tight writing.

Scream: So how do you blend the comedy with the horror? Is that an easy thing to do?

Tyler: Yeah I think it is great. A couple of years ago if there was a joke in horror people would be like losing their fricking minds. The best horror movies have a really vicious wit. Like with the early Peter Jackson stuff, he uses the laughs to let people off the hook for the scare. So I wanted to find a balance as much as possible. I was worried that Patchwork would lean too far to a comedy/horror rather than a horror/comedy, but we are in FrightFest, so it has started on the right track.

Scream: You said last night in the Q&A it took 12 days to make Patchwork? How this possible? 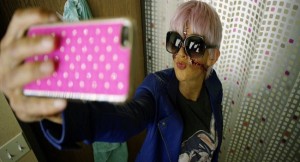 Tyler: I tend to have a specific shot list but it is a sad reality that there are things I will have to leave out. It is a tough balance and you have to be realistic. My DP Pawel Pogorzelski, who shoots really gorgeous images has a very gifted eye and what he does is very creative. But also I really don’t like being in a position where I have to invent something, I would rather get all the pieces and come up with a way of doing it the way that I want. It bothers me when I have to deal with chaos that happens on the day of my work.

Scream: Are you working on anything else now?

Tyler: Yeah I am attached to a script and I have a pilot called Body Count, which is circling onto people pretty soon. I also have a script called Dissections, which I am hoping to do at some point.

Scream: When is the official release of Patchwork in the UK?

Tyler: We don’t have an official date as yet but we are looking at October.

Scream: No way, I feel so lucky! I would like to thank you for speaking to Scream.

Tyler: It’s been a pleasure.