A trailer has appeared for Chilean mountain-biking horror Downhill, ahead of the film’s UK premiere at Frightfest next month. Currently seeking distribution, the film is headed for the Cannes market with the trailer and sales art. 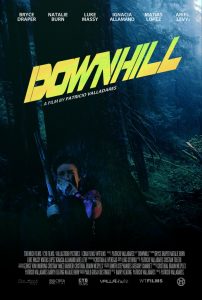 Synopsis:
After his best friend dies in a racing accident, biking star Joe agrees to go back on the wheels for an exhibition in Chile. On a test run with his girlfriend Stephanie, they stumble upon a badly injured man dying from a mysterious virus. That’s the start of a very bad day for them as they become the target of relentless killers ready to do anything to keep their secret to go out of the mountains.