Two posters that we think would look great in a frame have been released for The Neon Demon. One is a stunning pink design that draws on the films retro feel, like Nicolas Winding Refn’s previous film Drive. When speaking about The Neon Demon’s comparison to Drive, composer Clint Mansell said, “There are a lot of places where the music is really pushed out more into the spotlight, even more than Drive.” Drive has, arguably, one of the greatest film soundtracks in recent memory, so it would be great if Refn’s next film was able to rival Drive’s astounding score.

Reminiscent of posters from the ‘80s, the second poster emphasises the film’s place in the horror genre as it shows Jesse (Elle Fanning) covered in blood. It’s another gorgeous design that certainly fits the film’s focus on the wicked dying young. 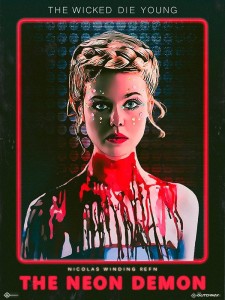 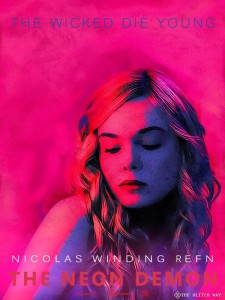 Synopsis:
When aspiring model Jesse moves to Los Angeles, her youth and vitality are devoured by a group of beauty-obsessed women who will take any means necessary to get what she has.

The Neon Demon will be getting a release this year, courtesy of Amazon Studios and additionally stars Keanu Reeves, Christina Hendricks and Jena Malone.