Two Minutes with Tom Holland will delve behind the scenes of the celebrated filmmaker’s work as he tells tales from his career. The 22-episode series will be directed by indie filmmaker Christian Ackerman (Hell’s Belles), and hosted by actress Carlee Baker (Lucky McKee’s The Woman, Karate Kill).

“If you’d like to hear never-before-told stories from Fright Night, Psycho II, and many more – from Tom himself,” says Baker in the press release, “please visit our GoFundMe page and get involved. We’ve got some incredibly cool perks for our contributors, as this series will be for the fans and by the fans. Let’s keep horror alive!”

Holland himself adds: “I’d like to take a moment to thank the horror fans out there for their years of love and support of my work, and I look forward to many more years of scaring the hell out of you and of telling you a little bit of how I did it, in ‘Two Minutes with Tom Holland.’” 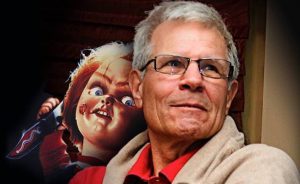 Before marking his directorial debut with Fright Night, Holland wrote grim werewolf flick The Beast Within, vicious punk thriller Class of 1984 and the seriously underrated Psycho II. He also has nearly 30 screen acting credits to his name, including Hatchet II and the TV adaptation of Stephen King’s The Stand.

You can donate to Two Minutes with Tom Holland here.