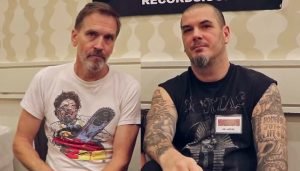 This year saw the release of Songs of Darkness and Despair, a collaborative album borne of an unholy union of two icons in their respective fields, Phil Anselmo (Pantera, Down, Superjoint Ritual, etc, etc.) and Bill Moseley (The Texas Chainsaw Massacre 2, The Devil’s Rejects, etc, etc.). Known simply as Bill & Phil, the pair released their collection of swampy, sludgy, country-tinged metal tunes through Anselmo’s own Housecore Records. This week, Revolver premiered the video for the track Dirty Eye, and it’s a gross-out, bizarro, hilarious surrealist treat.

Directed by Ryan Oliver, the vid features weird little puppets of Bill and Phil, as well as some squirm-inducing eye/orifice action. The filmmaker told Revolver:
“…it was a special honor to make a video for Bill & Phil. My crew and I had a lot of fun making this bizarre puppet show over the past winter/spring. This opportunity came right on the heels of our last Housecore video for [Housecore labelmates] Child Bite’s ‘Vermin Mentality.’ Though different, I think they complement each other quite well. Once again, we were trusted to do what we wanted creatively, and in the end, it seemed best to follow Bill Moseley’s lyrical cues and try to interpret them in an entertaining fashion. We’re pretty pleased with the turnout and hope it lives up to the uniquely wild music on this record.”

Moseley added:  “This video is down ‘n’ dirty and comes with no strings attached. Well, except for the puppets. I can’t speak for Phil, but frankly I’ve never looked better!” 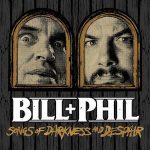 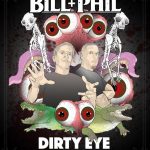 Meanwhile, Anselmo’s Housecore Horror Festival will return to Texas this year, with dates to be confirmed.