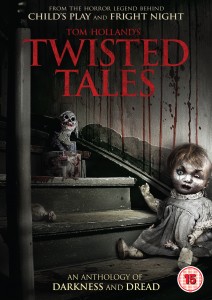 Synopsis:
From the legendary horror director, Tom Holland comes a chilling must-see new anthology in the tradition of The Twilight Zone, Masters Of Horror and Outer Limits. A magician with a sinister secret, the living dead and even the Devil himself lurk inside these twisted tales that will send a shiver down your spine and a laugh from your lips.

When talking about Tom Holland there will be plenty of talk about such films as Fright Night and Child’s Play. A well versed horror director, Holland has been involved in a number of horror projects and has seen him work with a number of modern horror legends both behind and in front of the camera. For his latest project Holland has curated an anthology consisting of nine shorts which feature a terrific cast including Angela Betis (May), AJ Bowen (You’re Next), Danielle Harris (Rob Zombie’s Halloween) and Ray Wise (Digging Up The Marrow).

Touted as the next best thing since Creepshow with elements of The Twilight Zone thrown in for good measure, I would be lying if I didn’t say that the sound of Tom Holland’s Twisted Tales had me intrigued. I for one enjoy watching anthology films so I was curious to see what the creator of Fright Night and Child’s Play had to offer his audiences. So in featuring killer technology, crazed sociopaths, apocalyptic nightmares and creative monster stories, Twisted Tales should have been a surefire recipe for success… but it isn’t.

Twisted Tales plays out more so as a horror anthology movie for the ‘90s Goosebumps generation except for this time the gore and adult content are turned to the max. Speaking of which, just like the popular TV series, Twisted Tales doesn’t focus on scaring audiences but it also blends in a definite sense of humour which at times becomes part of its limited charm. Segments like “Bite” and “The Pizza Man” are told entirely tongue-in-cheek and will raise a snigger or two amongst viewers. However, segments like “To Hell With You” and “Fred and his GPS” will leave you wondering why you’re actually watching as neither segment is entertaining.

Moving forward, the stories themselves are creative but their execution is just incredibly poor. The effects are dated and the performances from the cast in each episode are just plain awful. I would have been willing to forgive this if it kept a decent standard throughout the episodes but there is not. The series as a whole goes through peaks and troughs but remains inconsistent which is a damn shame. So for those expecting an anthology film that matches the standards of Creepshow, please lower your expectations as to avoid any further disappointment.