When it was announced that David Lynch and Mark Frost would be working on a new series of cult classic TV show Twin Peaks a few years back, the show’s avid fan base (ourselves included) were understandably salivating at the prospect of diving back into that weird and wonderful world afresh. Since the initial set photos were released earlier in the year it feels like time has flown by, and we already find ourselves at the halfway point of the new series, hosted on Showtime in the US and Sky Atlantic in the UK. The perfect time for a quick catch-up, wouldn’t you say?

First of all, let’s dig a bit into the context. Love it or loathe it, anybody who caught the original two series will be fully aware that it holds an entertainment value that is utterly unique – and impossible to pin down in terms other than ‘Lynchian’. This is a universe where the banal and the grotesque sit side by side, a kind of nightmare laced with slapstick humour and heart-wrenching elements of sentimentality. When all’s said and done, it’s left to each individual viewer to decide which feeling prevails.
Getting to the bottom of Lynch’s motivation

What we can say with some objective certainty is that the lasting underground appeal of Twin Peaks, as with most other cult classics, was partly due to its limited run of episodes following primetime cancellation – a mere 30 in total. It seems that, even though ratings were falling – from an initial 34 million to well under 10 million by the end of series two – those who continued to watch and enjoyed the show found themselves becoming unusually besotted. It clearly left a baying audience with an unrequited desire for more.

Not that Lynch should ever have to defend any artistic decision he makes, but it does beg the question of whether there was a real need to commit a new series at all…? Instinct tells us that he’s probably the last director on Earth who’d be willing to reprise, and potentially risk the impact of, a work of art that already stands so firmly on its own. Well, you’d have thought we’d learnt our lesson by now: that figuring out Lynch is like trying to lick your elbow. It still doesn’t make you feel any less compelled to try.

What we can gather from the rare interviews that he has given recently – this one for Variety, for instance – is that he simply felt the presence of an idea. At the end of the day, he’s just as enamoured with the show, the characters, the setting and the mood as we are. And, he also clearly felt there was enough there to warrant getting back in the saddle for another ride. That’s more than enough reason for us.

Working the world out (again) 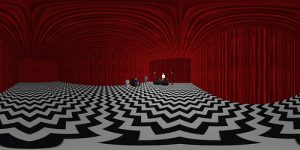 So here we are, 25 years later, with many of the same old faces still intact. A continuation of the second series rather than a remake. Sounds simple enough, right? Not exactly. If you cast your mind back to the first series, particularly the first two or three episodes, we’re introduced to this strange world in fairly straightforward terms. We get to know the main cast within the structure of a classic whodunnit mystery, which carefully becomes more surreal at all the right stages. The viewer is akin to a blissfully unaware frog placed in room-temperature water, only to find out later that they have been gradually boiled alive.

This time around, the dual-part opener is just as much about trying to work out what the hell is going on, and how this is all going to work, as it is about becoming familiar with any sort of structured narrative. In this sense, any new viewers who decided to give the new series a go without checking out the original(s) are probably more inclined to jump straight out than stick around in the already bubbling peculiarity. Those already familiar with the show will struggle not to become engrossed immediately at the sight of those flowing red drapes and zig zag flooring. And Agent Cooper’s wide and ageing eyes, of course. From there on out, we’re introduced to new settings, new characters and new impulses.

Scenes that stick in the mind
Lynch’s ability to craft unique scenes that haunt you for days afterwards is beyond comparison – and, of course, the new series is packed with them. Take Cooper’s ridiculous casino scene for instance, where he wanders around playing slot machines in a kind of semi-hallucination and hits 28 straight jackpots. According to online operators such as Betway, one of the most important fundamentals of succeeding on any slot game is to know the specifics of the slot machine you’re playing. For Agent Cooper, that doesn’t seem to be the case at all. His method seems rooted in wandering around with a distinct lack of cognition and shouting out ‘HELLO’ before spinning the reels. An interesting technique, you have to admit. Of course, on the other hand, winners aren’t made through talent alone, and Cooper seems to possess the self-confidence Psychology Today suggests is a winning trait.

Anyway, as we devour episode after episode and become reacquainted with the design of this world, we also start to find Lynch’s intended balance between the nostalgic and the refreshingly new. The unforgettable introduction of Michael Cera, for instance, in his cameo role as Wally Brando, son of Andy and Lucy Brennan. The idea of getting Cera to do a terrible Marlon Brando (in The Wild One) impression epitomises everything that is both strange and hilarious about this universe. Oh, and of course we’re finally starting to find out who exactly the real Diane is, which firmly puts to bed the theory that she never really existed beyond Cooper’s dictations in the original series.

In all, some might say the new series (so far) is a little darker, a little slower, and more urban than the first two – and we’d be inclined to agree. Since season two ended in the early 90s, it seems that Lynch himself has moved further into that direction with each of his subsequent film projects. This means that Twin Peaks feels changed somewhat, but with its natural essence still intact. It feels stranger. And that’s not a bad thing at all.