Twin Peaks May Have a Premiere Date, plus Sundance Rumours

As excitement mounts for the long-awaited return of David Lynch’s cult TV phenomenon Twin Peaks, Showtime continues to keep details regarding the third season under tight wraps, including any clue to a premiere date. Online speculation reached fever pitch this week however, with images of a promotional 2017 calendar sent out by the network seeming to indicate an airdate of April 30th.

As seen in the below image, the date is marked with a “Welcome to Twin Peaks” graphic, which can surely mean only one thing, right? Furthermore, the month of May has Twin Peaks as its theme, which could mean that audiences will be watching the latest goings on in Washington State’s weirdest town throughout that month. 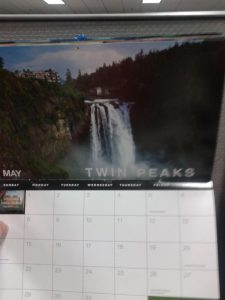 Showtime are of course, saying nothing official about this or the building rumour that Twin Peaks may feature at the 2017 Sundance Festival later this month. A Twin Peaks TV Critics Association panel has been scheduled for January 9th, and it’s entirely possible that a full trailer or teaser of some kind may be screened, although I wouldn’t bet on any more than that. Perhaps the festival will merely provide the platform for an official announcement of a premiere date. Perhaps the rumours will amount to nothing at all. We’ll have to wait and see. 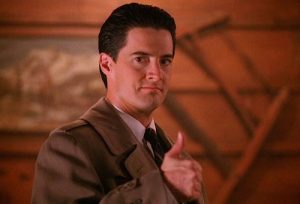