Turn Your Back on the New Dark Tower Poster

An alternative poster has been released for Nikolaj Arcel’s The Dark Tower and it is only slightly different to the new poster we were recently treated to. 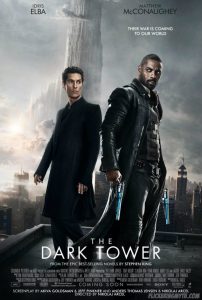 In this one, Idris Elba’s Gunslinger Roland Deschain and Matthew McConaughey’s The Man in Black dominate once again, still standing back-to-back, but a little closer together. You’ll also notice that the location has changed and, this time, they’re standing on the top of a building and the world is, not quite, going through the same amount of destruction.

The Dark Tower additionally stars Fran Kranz, Abbey Lee, Jackie Earle Haley and Katheryn Winnick. The film will be released in the USA on 4th August and the UK on 18th August 2017.