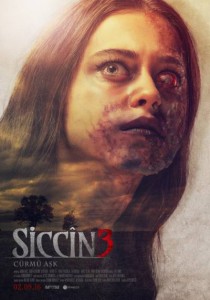 Hot on the heels of Can Evrenol’s festival hit Baskin comes more Turkish horror, in the shape of Siccin 3, the third film in the supernatural horror series. While plot details remain elusive, we couldn’t help but share with you this intense, nerve-rattling trailer.

Released in 2014, the original Siccin told of a young woman who dabbles in black magic after becoming jealous of her cousin’s wife, with rather catastrophic results. Director Alper Mestçi returned for more occult-based bloodshed a year later for Siccin 2, and looks to have crafted something pretty damn freaky with this third helping.

Check it out below, and prepare to have your senses assaulted with a mile-a-minute barrage of spectral entities and charred and bloodied faces.