With the previously release 8-minute prequel No Tomorrow – A Turbo Kid Tale having began to expand on the story told in 2015’s fan favourite Turbo Kid, and September’s announcement that a sequel proper is in the works, it seems we’re in for plenty more action with The Kid and robot pal Apple. For those keen to know more about skull-masked villain Skeletron however, his backstory is also set to be told in a new comic entitled Skeletron Unleashed.

As you can see in the sneak peak of some pages drawn by artist Jeik Dion for Studio Lounak, the comic has a fittingly retro flavour, looking as though it has come from an early issue of 2000 AD. Skeletron Unleashed will be the second Turbo Kid comic outing, with the No Tomorrow short itself based on a crowdfunded comic. 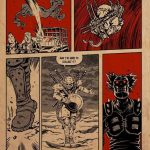 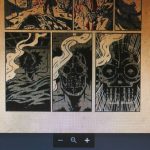 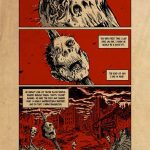 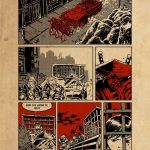 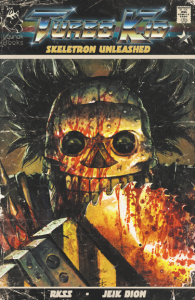 Here’s the official line:
The Turbo Kid prequel series continues with the story of Skeletron! This second opus follows the path to hell of the man behind the mask of Zeus’s first mate, this bloodthirsty beast convinced of beeing a robot.

Meanwhile, Yoann-Karl Whissell – who directed Turbo Kid alongside Anouk Whissell and François Simard, the trio known collectively as RKSS – said back in September that Turbo Kid 2 “…will be a direct sequel to the first film, taking action where it ended,” and that he hopes to begin shooting in summer 2017. Get those Gnome Sticks ready.