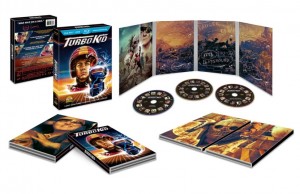 We were massive fans of Turbo Kid when it hit our screens last year and we’re still in awe of how wonderful it was. Undoubtedly, it was one of the most fun, gory and action-packed films of 2015, so if you haven’t watched it yet, where have you been?!

Epic Pictures has announced that Turbo Kid will be receiving an Ultra Turbo Charged Special Collector’s Edition of the film, which will be released later this month. It will include a Blu-ray and DVD copy of the film, as well as extras that include Bloody Wasteland: The Making of Turbo Kid, T is for Turbo; the original short that inspired the film, mini documentaries, film festival introductions from around the world and still galleries that feature fan art. If that’s not enough, you’ll also get a ‘The Ride’ special booklet.

That’s a heap of Turbo Kid goodness and you can pre-order it now for just $19.99 from the film’s site. It will also be available on Amazon US. Sadly, those of us in the UK can’t fully enjoy this edition unless we have a multi-region Blu-ray player, boo! The collector’s edition will be released on 25th January.