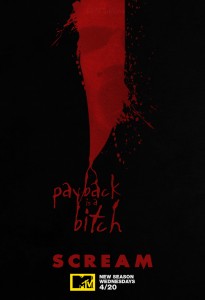 MTV announced last week that they will be premiering the new season of Scream on Monday, May 30th, a day earlier than originally planned. Then, at the MTV Movie Awards on Saturday, they dropped the first teaser.

Season 2 picks up with Emma returning to Lakewood following several months at a retreat where she has tried to come to terms with the violence experienced in the first season. Hiding her connection to the killer, Audrey is being harassed by someone who knows her secret, while Noah is getting closer and closer to the truth behind the bloodshed.

Michael Gans and Richard Register serve as executive producers and showrunners for season 2, along with Harvey and Bob Weinstein, executive producing under the Dimension TV umbrella.