Details have surfaced regarding An Ending, the latest project from Jessica Cameron, along with this striking poster art by Maxwell Jacques Leclerc. Cameron is producing the film, as well as co-directing alongside scripter Josh Chiara, who acted as DP on her previous film Mania. 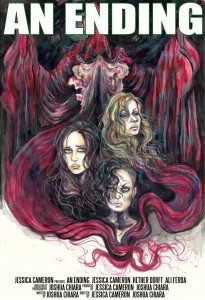 An Ending follows Florence (played by Cameron), who awakes into a terrifying nightmare world after being rushed into hospital. She meets up with Collette and Molly, who have both been in the nightmare world longer than she. As the three women are pursued through the world’s corridors by an unseen evil, they become separated and each experience their own personal journey.

It’s a deliciously trippy premise, and could make for something really quite striking and unique.

Heather Dorff, who starred in Cameron’s directorial debut Truth or Dare, plays Collette, alongside Ali Ferda as Molly. Ali Ferda also stars alongside Jessica Cameron in road movie horror Desolation, which is currently in post production. An Ending is due to start filming at the end of April.