Horror anthologies and holidays are forever united of late, what with last year’s hits, A Christmas Horror Story and Tales of Halloween. With their strategy of intertwining segments revolving around one particular time of the year working so well, I was intrigued by the latest horror anthology/concept on the block, Holidays, a film rooted in an idea devised over a decade ago by producer, John Hegeman with nine directors shooting eight different shorts, all of which are loosely related to very different times of the year.

With Holidays available on iTunes, Amazon, and other VOD outlets now, SCREAM caught up with Gary Shore, Ruth Bradley and Isolt McCaffrey at this year’s TriBeCa Film Festival to talk all about the latest anthology and the segment they were all involved in, “Saint Patrick’s Day.”

SCREAM: Gary, how did you get involved to direct a segment in Holidays?

Gary Shore: I’ve know the guys from XYZ for a few years and we had a couple of things in development a while ago. And then they came back to me and were playing around with the idea of an anthology series and I had just come off a studio film so the thought of going back to my roots and doing a down and dirty short form film with minimum resources was really quite appealing. Also, everyone seemed to be on the same kind of page in terms of the tone and kinds of stories they wanted to tell so it was very attractive to me and a nice way of creatively experimenting.

SCREAM: Was deciding to film the “St. Patrick’s Day” segment out of personal choice?

GS: We pretty much got to pick out own but when I said I would do it I said to myself that if someone else picks St. Patrick’s Day I’d be kicking myself, so it wasn’t really out a choice; I kind of had to jump in and do it.

SCREAM: What inspired you to focus on motherhood and the fears and expectations of becoming a parent. Do you think getting married not long before might have had something to do with it?

GS: It could be a coincidence, sure. I mean, you’re inspired by everything around you. Myself and my wife, we were expecting our first child around the same time so I don’t really know to be honest. We’ll leave a question mark over that one. [laughs]

SCREAM: Was there a casting call or did you bring Ruth and Isolt straight on board?

Ruth Bradley: Well I don’t actually know if Gary had me specifically in mind.

GS: We got her after five other actresses turned us down [laughs] and this was the very first film work Isolt had done.

Isolt McCaffrey: Yeah, it’s the first thing I’ve done at all. I hadn’t done any ads or anything like that, but it was really good. I loved all the crew and everything. They were all so nice and it was all like a real family production. It was really nice. I really enjoyed being the creepy person in this horror short too and Gary really helped me loads. He was really nice. 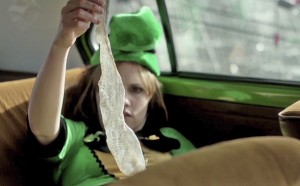 SCREAM: Ruth, it must have been quite a challenge putting yourself in the shoes of this teacher who gets what she wants, a baby, but only to discover it’s not exactly what she was hoping for?

RB: Yes. It was a really great script and I just really liked the fact that it was about someone really wanting something that they couldn’t get. For me, I thought the script was brilliant, although I didn’t really understand it until I met Gary [laughs], but then, during the course of filming I was like, “Ah, right! Now I understand it.” And it was all great fun and really easy to get into because we were having so much fun.

SCREAM: You say fun but you must have suffered in some of the film’s more gross out moments.

RB: Yeah. I had a bit of an issue with having to hold a mouse; I’m terrible with rodents. That was a huge fear I had to overcome. Holding a mouse in the bath and worrying about what he was going to do was ridiculous because he was about 2 inches tall. But then all that stuff with me getting sick and all that I really loved.

SCREAM: Gary, with the film focusing on Ruth’s character wanting to have a child, why did you opt for a nefarious little girl in her class rather than maybe an adult romantic interest?

GS: I don’t know, but I was actually originally thinking about having a man being pregnant. I sent the script to my friends but they all thought it was a bit too weird so we pulled back on that. And then, with the character, I liked the idea of something like The Witches of Eastwick where the characters come to the community and just cause havoc, but their being there actually helps the people. So here it’s like a little angel who comes to town but is actually a devil. I just thought it would be a lot more interesting if it were coming from a little girl. Also, growing up in Ireland, our interpretation of St. Patrick is really kind of framed from the time you are in Primary School because it’s about the mythologies and the ideas of snakes and St. Patrick chasing the snakes out of Ireland which I think I believed in until I was like 15. I think it’s actually in the history books. [laughs]

SCREAM: You mention snakes there. Can you walk us through some of the props and effects involved?

GS: Well there were a couple of things. There was a documentary we did first. I actually wanted to make that documentary as a behind the scenes DVD extra with St. Patrick’s told through the lens of if it was on say Father Ted. It was all rubber snakes. It was literally a guy on a ladder throwing rubber snakes over the camera or we went down to the beach and we started throwing rubber snakes in the water or rubber snakes down streams. It was a really lo-fi, really silly film. But then, when we got to the scenes in the bath it was more technical and we had to use some digital effects and 3D in there. But we tried to keep it all as much as possible in camera so we had a body double for Ruth. We put out an ad looking for a pregnant woman and we needed her to be in her last 4 weeks of pregnancy and I was actually quite surprised that people got back that they would be interested. The first person we had dropped out because she went and had her baby and then the second person was actually really fine about it and ended up being the sister of one of my old flatmates. It was just a total coincidence.

SCREAM: How much freedom were you given? Did production impose any kind of restrictions in terms of trying to keep the tone of each segment similar?

GS: No. It was pure freedom to do whatever we wanted. All I had to do was put a genre spin on the holiday that I picked. So doing a genre piece about St. Patrick’s Day I’d thought of doing this one because I didn’t want someone else to do it and then when I actually did pick it I thought, “Oh God! What have I done? How am I meant to put a genre spin on this? It’s a Christian holiday.” But then I thought about the snakes and all that and one thing lead to another and we got there, but no, there was never any conversations with anyone. There was never any kind of global structure. I guess they just picked the filmmakers that they felt would work.

I haven’t even seen the film actually so I’m just talking out of my arse here. [Iaughs] I honestly don’t know how it runs. But the first time I’m going to see it is going to be with an audience and that’s what I really wanted to do to take it in. I’m excited to see how what it’s like.

SCREAM: To wrap up, are you able to share what you’ve got coming up after Holidays?

GS: I’ve a couple of projects lined up for next year that, unfortunately, I wouldn’t be able to talk about right now but they will definitely be similar to the trajectory I’ve been doing already. 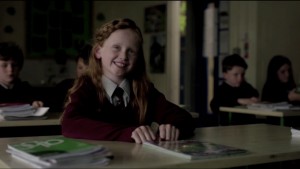 IM: I want to do more acting but I don’t know what’s going to happen but I do have a few voice-overs so we’ll see what happens.

We’d like to thank Gary, Ruth and Isolt for speaking with us at TriBeCa and you can find out all you need to know about the film over at the Holidays’ official website and Facebook page.

You can read our review of the film here and we’ll leave you with the official trailer: