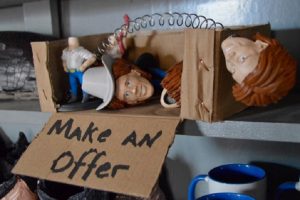 Filming has wrapped on the pilot episode of SyFy’s Tremors series, which takes us back to Perfection, NV 25 years after the events of 1990 cult classic of the same name. The news was announced by returning star Kevin Bacon, who wrote on Instagram: “So long to New Mexico. Had an amazing time shooting this pilot. Hope I can keep walking in these boots.”

Bacon posted the words with a picture showing some cheap Valentine McKee bobble-heads gathering dust on a gift shop shelf, highlighting Bacon’s character’s status in Perfection as something of a has-been celebrity.

Cube/Splice director Vincenzo Natali directed the pilot for SyFy, who are still yet to order a full season.