It was confirmed back in September that a sixth instalment in the long-running Tremors franchise was on the cards, and that it would once again see the return of actor Michael Gross as survivalist Burt Gummer. It was through Gross’ Facebook page in fact, that the news was announced, when he excitedly wrote: “IT IS HAPPENING!!! Tremors and Graboid fans, there WILL be a number 6!!!” Gross has been back on Facebook this week, and is just as enthused to announce that Tremors 6 will begin shooting next week, writing:

“NEXT WEEK, Jamie Kennedy and Burt Gummer are off to South Africa to film the latest Tremors sequel. Hope to keep you up to date on our goings-on (without giving away any secrets, of course). I have been silent for many weeks, and will fill you in on the details in the next few days. A happy new year to family, friends and fans.”

As Gross suggests, details about the film are being kept locked away for the time being but we do know that as well as Scream’s Jamie Kennedy – who joined the series with 2015’s Tremors 5: Bloodlines, playing Gummer’s sidekick Travis B. Welker – the sequel will also star straight-to-video regular Tanya van Graan (Death Race 2, Lost Boys: The Thirst) and Greg Kriek (Momentum). Director Don Michael Paul (Half Past Dead, Lake Placid: The Final Chapter) returns, having directed the series’ fifth entry. 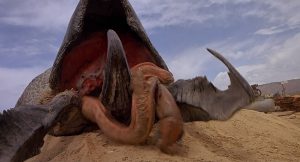 Meanwhile, a Tremors series is still in development at Amazon, and will see original star Kevin Bacon returning to fight the Graboids.