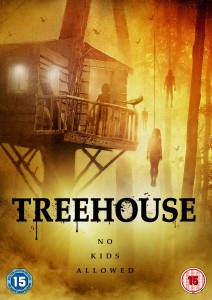 Synopsis:
Brothers Killian (J. Michael Trautmann) and Crawford (Daniel Fredrick) are out in their local woods with the intention of a fun-filled night. Their evening of frivolity is soon cut short though as they discover a girl called Elizabeth (Dana Melanie) who sits injured and petrified in the lofty seclusion of a remote treehouse, while shadowy figures stalk the nocturnal wilderness below.

British director Michael Bartlett has carved a well-earned reputation in recent years as a talent to watch. His debut feature THE ZOMBIE DIARIES took a £500k budget and turned it into one of the standout indie horrors of 2006; earning a distribution deal in the USA with Dimension Extreme in the process. A solid sequel followed a few years later, but it was his 2013 movie THE PARANORMAL DIARIES: CLOPHILL that defined him as a director. Its resolute desire to blend documentary with drama as well as its refusal to kowtow to populist genre trends gave it a stoic individuality.

A title sequence with a lush aerial backdrop of rural Missouri – where Bartlett himself has relocated – welcomes us to the feature, and from the outset it’s clear that TREEHOUSE will follow its own path under Bartlett’s self-assured direction. This was the guy who in an interview stated “I saw Jeepers Creepers in 2001 and thought – I could do better than this”, so any leanings of predictability are swiftly dispatched.

With initial exposition deftly handled, much of the core of TREEHOUSE takes place in the very location the film takes its name from as we find ourselves in the company of Killian, Elizabeth and a lone walkie-talkie which hints sporadically at the peril at ground level. With the characters of Killian and his brother Crawford having been well-established, the discovery of Elizabeth who we recognize from the pre-credits sequence only adds to the dynamic. As the film progresses, such good writing provides a solid emotional connection with each of these characters; a trait all too rare in contemporary horror.

Succeeding in balancing a potentially awkward blend of thriller, horror and coming-of-age drama, TREEHOUSE manages to sustain its underlying threat through the palpable tension created from what’s primarily a two-hander between Killian and Elizabeth. Both actors are excellent in their roles; Trautmann is great, but he’s overshadowed by the impressive performance of Dana Melanie whose depiction of Elizabeth steals the film. With Bartlett’s deliberate, gradual pacing of TREEHOUSE, any fidgety lack of patience from an audience raised on cattle-prod scares will be stifled by a superbly tense, unrelenting final act that makes this low key release one to hunt down and purchase.