Travis Z’s The Midnight Man to Release in January 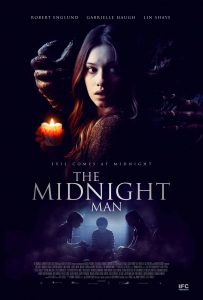 Here us out right now, but The Midnight Man looks freaking awesome. It’s a culmination of a few very familiar horror ideas and tropes; it follows a group of young adults who play a deadly game called The Midnight Man which pits you against a supernatural and demonic force. It looks like a mix of this year’s dreadful The Bye Bye Man and every Ouija board film you’ve ever seen, but some of the imagery is delightfully chilling.

Synopsis:
Alex (Gabrielle Haugh) is a typical teenage girl who lives with her sick grandmother, Anna (Lin Shaye). While searching through the attic, Alex finds directions to a game, which played properly, will awaken “The Midnight Man” (Kyle Strauts), an evil being who will make your worst nightmare come true. At first, Alex and her friends think the game is harmless fun. It is—until The Midnight Man comes to play…for real. When Dr. Goodberry (Robert Englund) comes to the house to check on Anna, he can sense The Midnight Man’s presence, and warns the kids that when The Midnight Man comes to play, he plays to win.

The Midnight Man stars horror icons Lin Shaye and Robert Englund, as well as Logan Creran, Grayson Gabriel and Emily Haine. It comes from director Travis Z – who doesn’t look like he’s drifting too far away from crafting a safe and simple supernatural scarefest – but anything has to be better than that Cabin Fever remake, right?

The Midnight Man will be released on VOD on 22nd January 2018.