A transfixing and beautiful poster has been unveiled for Never Here, a Lynchian mystery-thriller directed by the award-winning film-maker Camille Thoman (Falling Objects, The Longest Game). The film will be Thoman’s first fictional feature film and will focus on a photographer who believes that someone is watching her, which soon leads to her blurring the lines between the real and the imagined.

The new poster shows the films’ star Mireille Enos, who you may recognise from starring in Devil’s Knot, the English-language version of the Killing and most recently, the Philip K. Dick-inspired series Electric Dreams.

The poster focuses on the film’s Lynchian inspiration and touches on the haunting and dream-like qualities the feature will also focus on. Colour us intrigued by this one! 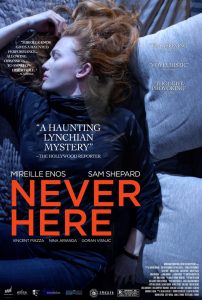