Synopsis:
When troubled teen Milo, who has a fascination with vampire lore, meets the equally alienated Sophie, the two form a bond that begins to blur Milo’s fantasy into reality.

Once every blue moon, a first-timer’s feature is accepted at Cannes Film Festival. It’s actually probably one hell of a lot less often than that, but case in point, the festival organisers saw something rare and special in writer/director Michael O’Shea’s debut The Transfiguration and there it was, screening as part of the Un Certain Regard strand.

Boasting an impressive and extensive cast including the likes of Eric Ruffin, Chloe Levine, Aaron Moten, Carter Redwood, Danny Flaherty, Larry Fessenden and Lloyd Kaufman, O’Shea’s poignant chiller follows the trials and tribulations of teen Milo, who lives alone with his older brother. Constantly bullied at school, he seeks solace in a particularly unorthodox passion for vampire lore, mostly learnt from his rather extensive collection of vampire flicks and some bedtime gothic textbook reading.

A masterful, macabre mix of Martin and Let the Right One In, The Transfiguration proves itself to be on a par thanks to its unornamented, chilling and novel blood-sucking spin on millennial angst. Despite all the similarities that can be drawn with the aforementioned films, what makes O’Shea’s debut so appreciably fresh is its outright self-awareness in the form of vehemently referencing pretty much every vampire film under the sun. This serves as a particularly useful tool, especially given the fact The Transfiguration doesn’t deal directly with genuine vampires, with O’Shea’s depiction of vampiristic rituals serving as a bullied kid’s escape valve to grieve the loss of his mother and vent his daily frustrations painting a disquietingly palpable portrait of the consequences of a life of destitution. All of this is buoyed by Eric Ruffin’s arrestingly authentic performance and the neo-realist nature of the movie with much of the film shot in live locations whilst the cameras shoot from afar, offering the audience a voyeuristic and highly effective perspective.

Much like Milo’s character in the film, O’Shea’s only interest is vampire films that ring true, and for that reason The Transfiguration goes down more of a slow-paced character study route, particularly when, despite his diffidence, Milo forms a bond with neighbour Sophie (Chloe Levine). A self-mutilator and living with an abusive grandparent, she soon forms an intriguing relationship with Milo, rich with all the trappings of films such as the aforementioned Let The Right One In, with their kinship eventually laid on the line when she happens upon the rigorously detailed journals Milo keeps to chronicle his vampirical ventures. Also worthy of mention here is the fact that Milo’s intrigue in vampire lore is never conveyed as something preternatural but rather is related to the audience more as a psychological trait and the onset of psychopathic behaviour at a tender young age, all of which, of course, adds to The Transfiguration’s success in subverting the vampire genre. 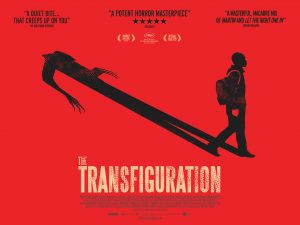 Those horror aficionados put off by the idea of more of a laggard character study (even though this reviewer never experienced a dull moment) should also know that O’Shea’s initial veritable approach paves the way for the disturbingly visceral implications of vampirism that come later. Sudden bursts of bloodletting towards the end of the film make for a particularly rough ride for the audience given O’Shea’s intricately elaborated veracious backdrops and the lead players’ markedly plausible performances.

Essentially down to Ruffin and Levine’s arresting chemistry and O’Shea’s overtly self-aware approach, those of you who are partial to films more concerned with purveying the most plausible kind of dread should taste this fresh blood director’s novel debut.