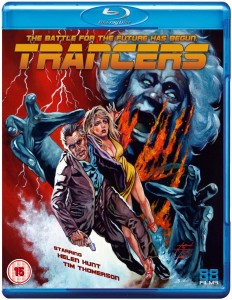 Synopsis:
Jack Deth (Tim Thomerson), a grizzled, Dirty Harry-esque detective from the twenty-third century, is sent back in time to 1985 in pursuit of his archenemy Whistler (Michael Stefani). With his consciousness now inhabiting the body of an ancestor, Deth teams up with sassy punk chick Lena (Helen Hunt) as he attempts to stop Whistler and his sinister army of mind controlled, zombie-like fiends – the trancers of the title – once and for all…

It’s among the greatest B movies ever made; a tough talkin’, rocket powered quickie from the king of the modern cut-price schlocker, Charles Band. Producer. Director. Huckster. Svengali; and in a forty year plus career chock full of delightful genre goodies, Trancers is one of the handful – along with TOURIST TRAP, RE-ANIMATOR and PUPPET MASTER – that has transcended from cult to untouchable, unarguable classic status.

Band’s simplistic, ruthlessly efficient style is the perfect fit for Paul DeMeo and Danny Bilson’s zinger-filled, rat-a-tat script; a pulpy, hard-boiled delight delivered with deliciously droll sincerity by Trancers’ cracking cast. Sixties TV veteran Stefani – whose first and only feature film credit Trancers would be – is a suitably creepy antagonist, while a young, pre-AS GOOD AS IT GETS Oscar win Hunt makes for a wonderfully spunky foil.

It’s Thomerson, however, who is Trancers’ core, his sharp, no-nonsense characterisation of Deth every bit as sci-fi-conic as Kurt Russell’s Snake Plissken or Arnie’s T-800. A role Thomerson would return to five and a half more times, in Trancers’ of varying quality, but entertaining, sequels, and one that he’d ape in Band’s similar DOLLMAN saga six years later, his Deth is a hypnotic anachronism; as out of place in his own time of 2247 as he is in ours – well, 1985 anyway. He’s a Noir guy in a science fiction world; a “Bogart from the future” as DeMeo and Bilson explain in 88 Films’ blu-ray’s Cybercrime.

Featuring Band and Thomerson too, it’s a breezy, fifteen minute making of piece from Ballyhoo Motion Pictures; the production company currently prepping CELLULOID WIZARDS IN THE VIDEO WASTELAND, the official, feature-length documentary chronicling the eighties exploits of Band’s legendary mini-studio, Empire. And while Cybercrime doesn’t dig quite as deep into Trancers as one would perhaps hope, it’s a solid watch and a great companion to Band and Thomerson’s terrifically knockabout commentary track.

With most of its bountiful spread cribbed from the fully-loaded American issue, overall it’s quite the blu-ray package from 88 Films; certainly the finest release in their enviable catalogue of Band’s Empire and Full Moon-made delights. Their usual trailer reel and a lovely little stills gallery are accompanied by a cute, two minute Rare Interviews segment – replete with clips of Thomerson, Hunt and TRANCERS II and III’s Megan Ward – and, best of all, the twenty-four minute Trancers half-quel, CITY OF LOST ANGELS.

Produced as part of Band’s ill-fated PULSE POUNDERS – the first of a sadly never realised series of anthologies designed to sequelize previous Empire-produced hits – City of Lost Angels has been ripped, cleaned up, and finally completed from a recently discovered VHS workprint, found in a box of old tapes in Band’s Los Angeles office. It is, naturally, of scuzzy but perfectly watchable quality; likely a nostalgic treat for those of us who grew up watching this kind of charming fluff on clunky ol’ cassette. And though its tale of a burnt-out Deth fending off a time-hopping female assassin isn’t  especially good, a returning Thomerson, Hunt and the peerless Art LaFleur as police chief McNulty mark it as required viewing for Trancer-philes and B-buffs. Heck, it’s just nice to have it finally available…

Elsewhere, there’s footage from the City of Lost Angels premiere at last year’s Chicago’s Flashback Weekend, with Band giving the brief skinny on Pulse Pounders’ not-quite-making, and – teasingly – a stunning, one minute promo of the doomed portmanteau’s DUNGEONMASTER 2 segment. With Pulse Pounders’ gleeful FROM BEYOND and Re-Animator-riffing Lovecraft short THE EVIL CLERGYMAN surfacing – on 88’s tidy blu-ray of the harrowing and nightmarish CASTLE FREAK – here’s hoping they and, of course, Full Moon find an appropriate home for this neat-looking mini follow up to Band’s endearingly daft 1984 fantasy soon.

Although 88’s serviceable sound mix isn’t anything to write home about, after years of so-so open matte DVD transfers all taken straight from Vestron’s old laserdisc, the  blu-ray is nothing short of astounding in the picture quality department. It’s a touch soft on occasion but, by and large, their HD master from Trancers’ original 35mm negative is a wow-er considering the film’s meagre budget and vintage. Free from overpowering DNR, Trancers retains a gorgeously film-y texture, and the vibrant, neon-soaked futuristic vistas of the late, great cinematographer Mac Ahlberg – a Band, Stuart Gordon and John Landis mainstay – are truly a sight to behold.