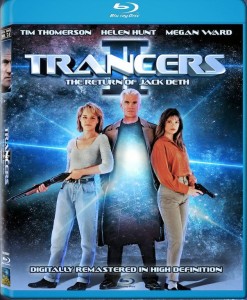 Synopsis:
Six years after travelling back in time to 1985, future cop Jack Deth (Tim Thomerson) has since married new love Lena (Helen Hunt) and settled down comfortably in the palatial estate of commodities broker Hap Ashby (Biff Manard). But Jack’s amity is soon broken when his ex boss McNulty (Art LaFleur) shows up to track down evil scientist ED Wardo (Richard Lynch) and stop him from building an army of zombies.

Full Moon Features, Charles Band’s second production/ distribution company, arose from the ashes of Empire Pictures in the late 80s to deliver the likes of Puppetmaster, Subspecies, The Gingerdead Man and numerous other bungled yet often ingenious/ successful productions. Most of their output was critically annihilated but later looked back upon fondly by fans and genre film-makers. Full Moon features shimmer in the styles synonymous with the time and are adorned by the company mantra to create low-budget films with a comic book feel and the scope of luxurious studio pictures. Full Moon are now mostly celebrated for their quirky concepts and innovative charm. Their fêted characteristics have since been referenced in the likes of Turbo Kid and The Mind’s Eye while many of their films have been given stunning HD makeovers.

Trancers 2 arrived in 1991, six years after the original, and has since ripened into a hackneyed retro classic complete with neon green credits and a sketchy Vangelis-like score. It’s a glaringly flawed sequel made enjoyable by some kooky characteristics and kitsch components but Trancers 2 remains an energised slice of horror/ sci-fi hokum. The performances are mostly plastic yet full of beans with physically vivid but shallow characters operating on autopilot like living action dolls. Pull the strings and hear phrases such as: “What’s the matter, you look like you’ve swallowed a cat?” and “Welcome to old California Alice, I’m your husband Jack Deth” to which his wife pensively replies: “Oh my God Jack it is you. The only man I ever had sex with,” just before passing out.

The pantomime production is dotted with familiar faces. Alongside Tim Thomerson (Jack Deth) and Helen Hunt (Lena) are Full Moon alumni Megan Ward (Arcade, Crash and Burn) as an escaped mental patient, Jeffrey Combs as the black goatee chinned Dr Pyle and former From Russia With Love and Thunderball Bond woman Martine Beswick. There is also a Barbara Crampton cameo and horror legend Richard Lynch (Bad Dreams, Necronomicon, The Lords of Salem) stars as the totally evil, mullet-headed ED Wardo. Sub-plots relate to corrupt environmental research facility GreenWorlds’ manufacturing of trancers (which are basically mutant killer zombies for those unfamiliar with the franchise) and an escaped institute inmate who claims to be Jack’s late wife, declaring: “I’m not crazy, I’ve just landed in the body of someone who is. I’m a special agent on a mission from the future.”

Alongside it’s myriad production flaws/ glaring budget limitations, Trancers 2 is dotted with countless perplexing quirks but the plot is punchy while action/ combat sequences are crafted with a puckish bravado and clownish poise. Jack’s ability to freeze time for ten seconds is also utilised in some amusing set-pieces while stand-out action sequences include a rack of ham exploding in slow-motion and a fork-lift gun fight. Other shoot-outs and larger scale gun battles are peppered with crimson squib explosions which make for brazen, gushing, hyper-boiled fun, especially when coupled with the sub-plot oddities. Trancers 2 is hardly high art but is bejewelled with a love of its peculiar source and a playful enthusiasm that glimmers through all of its cracks.

Extras:
Full Moon produced a series of Videozone/ behind-the-scenes shorts to accompany its main features, back in the day. The scratchy, ten minute Trancers 2 making-of (included on the disc) features a wired Tim Thomerson discussing the film’s influences, Richard Lynch explaining how his performance was inspired by Howard Hughes, while Jackson Barr and Paul De Meo mull over the writing process and reference their work on The Rocketeer and Flash TV series. The issue of nepotism in film production is also addressed: Tim Thomerson’s father and brother were given roles in the film as were Helen Hunt’s father and Charles Band’s mother and mother-in-law. Also included is an overlong blooper reel which is amusing for a couple of segments but mostly just features on-set goofing and cast corpsing. Finally, there’s a brilliant, nostalgia stoking 22 minute trailer-compilation featuring other Full Moon film ads such as: Dollman, Demonic Toys and the Puppetmaster trilogy etc, which is enormous fun, particularly for fans of the era.