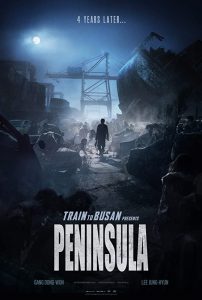 A contender for the best zombie film of the decade, 2016’s Train to Busan is a must-see for horror fans. And from the new teaser trailer, it’s sequel looks set to follow in its bloody footsteps.

Train to Busan Presents: Peninsula is set four years after the events of the first film, which saw the total decimation of South Korea. Jung-seok, a soldier who escaped the diseased wasteland, is forced to relive the horror after being assigned to a covert operation. The objective? Retrieve—and survive.

But when Jung-seok’s team stumbles upon survivors, their lives will depend on whether, in the direst of circumstances, the best of human nature prevails… or the worst.

Sang-ho Yeon returned to direct the sequel, which he co-wrote with Joo-Suk Park. The cast includes Gang Dong-won, Lee Jung-hyun, and Lee Re.

Get ready to run and check out the teaser trailer below!