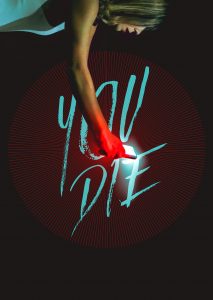 Dark Sky Films has unveiled the new trailer for You Die, an Italian horror film written and directed by Alessandro Antonaci, Daniel Lascar, and Stefano Mandala.

The film follows a young student named Asia who discovers a strange app downloaded on her phone. What looks at first like an augmented reality game turns out to be something much darker—an app that taps into the world of the dead, allowing her to see ghosts through her phone’s camera. As a timer starts counting, Asia is plunged into a horrifying fight for survival and must find a way to defeat—or pass on—the curse.

You Die hits DVD and VOD platforms on May 12th. Steer clear of mysterious apps and watch the new trailer below instead.